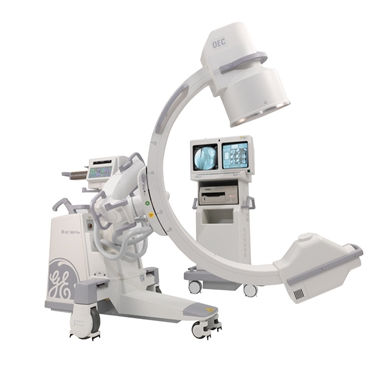 The refurbished GE OEC 9800 Plus c-arm has become the most popular mobile unit in the world.  With its rotating anode, patented battery buffer tech, quality locks, levers, and controls, it is built to last.

The simple point-and-shoot mechanism of the SmartView pivot joint enables the C-arm to adjust off-axis to whatever angle and position is needed, and can be controlled from either side.  All of its settings are furnished with OEC auto-adjust technology, such as the SmartMetal for when metals are introduced into the field, the SmartWindow which senses the collimator’s position, and the AutoTrack which detects any movement of the patient’s anatomy so as to render the image with the greatest clarity.

Its popularity is a testament to its ability, so purchase a used GE OEC 9800 today and join the growing trend.

The OEC 9800 Plus is available with a 9” or 12” Image Intensifier and Standard or Super C
configurations.